Anna and I were recently on the radio, and while I expected some questions about food, what I found difficult was the question about what our respective countries bring to our cooking. Anna, who is from Brittany, wouldn’t say that her food is particularly French (although I can vouch that she is able to turn out crêpe after flawless crêpe). Being from the States, I have a huge variety of cultures to draw from, but I wouldn’t say that my cooking is particularly American.

I think that food transcends borders, and — especially when we travel — we shift the borders that remain into unrecognisable patterns.  And so it follows that I don’t have a defining cuisine that reminds me of home, which that means that I’m not often homesick for flavours. Anyway, if I am, I can easily recreate them myself. A friend was recently bemoaning the lack of a good kosher shawarma place near her, and my first instinct was to find a recipe to send her. Will she make it? Maybe. Will it satisfy her craving? Hopefully. With trial and error, we can often recreate our food memories and thereby satisfy our nostalgia.

My best version of a Kalamata olive was the one (okay, maybe a few more than one) I ate on a verandah in Greece, sipping a glass of ouzo with The Author in the gloaming, just before the mosquitoes came out for the night. Although I have had many good Kalamatas since then, none can match the sheer perfection of that experience, a full-on sensory combination of soft heat settling on our bare shoulders, the saltiness of the olive, the cicadas quieting down, the cold liquorice of the ouzo brightening the palate, the sun setting behind us. I brought a tin of olives home with us, but even though it was the same brand that we had that night, they weren’t the same. Until I go back to Greece, I will not have that good an olive again.

Conversely, a few years back, when I was still living in Vermont, I was talking to a woman who had the good fortune to spend a week in Italy. I hadn’t been there in a while, and I was looking forward to going again at some point, so (practically salivating, thinking of the risotto, fried artichokes, fresh pasta, grilled fish,abundant vegetables, magnificent cheeses, gelato…) I said something like, “Oh, I’ll bet it was great! How was the food!?” And she said to me, with complete disgust, “The food was terrible. I didn’t have a decent meal until I got to airport for my flight back. And the pizza! It was awful!”

She added, “Why are they even trying to make American food anyway?”

I’ve had many pizzas in my life, and I have liked almost all of them. I don’t have a perfect version of a pizza: sometimes I like the crust thin and crackly, sometimes I like a Chicago-style deep dish pizza (which was maybe what that woman was referring to?),  and sometimes I like a traditional American pepperoni topping, sometimes something a little more daring. I suppose my pizza transcends borders. If you decide to make it, I hope you enjoy the trip!

A month ago, when I posted my very first blog, my friend Molly Mitchell Francis of the Shoreham Inn said, “While you’re at it – tell everyone they should be making their own pizza bases too. So simple, so delicious, so cheap.” She’s right.

Pizza is not complicated to make. Basically, you need to make a bread dough, and then you need to put some stuff on it and bake it. And the simpler your toppings, as with this broccoli pizza, the more they can really pack a flavour wallop.

Even if you let the dough rise a little too much (as I did when we were watching The Musketeers and I couldn’t tear myself away), the dough will be fine!

Also, let’s get over this idea that pizza is unhealthy. It’s basically an open-faced cheese and tomato sandwich, with maybe a little bit of something else thrown in for extra flavour.  How can that be bad?

I often make a tomato sauce ahead of time, especially with a meat-based pizza, like pepperoni or bacon and onion. But this version really sings with the freshness of the tomatoes straight from the tin. Bizarre, I know. And whatever you do, please don’t be tempted to use fresh tomatoes unless they are at the height of the growing season. They won’t be very good, and then your pizza won’t be as good either. Also — and I have to stress this point — even though it seems like a a big to-do, the processing of the broccoli is very important for the resulting flavour. If it helps, think of the broccoli as the sauce.

Finally, for the record, this recipe is dead easy to make, even though the length of the instructions would suggest otherwise!

Mix the water with the sugar and yeast and set aside to activate. Put the flour and salt in a mixing bowl (or the bowl of a stand mixer) and when the yeast mixture has started to bubble, stir it into the flour until incorporated. Then knead the dough (either by hand or in the mixer) for 10 minutes. For pizza, I like a slightly more slack dough, so I usually add another ounce or two of water at the beginning. If in doubt, remember that when it comes to bread dough, “wetter is better”.

Leave the dough, covered, to rise for about two hours, or until doubled in size. In the meantime, you can prepare all the rest of the ingredients, so they are ready to go when the dough has risen.

Bring a pot of water to the boil, and add a teaspoon of salt. At the same time, fill a large bowl with about 2 litres of very cold water (it also helps to add some ice cubes). Set it aside.

Cut the broccoli into florets, and trim the tough outer edges of the stalk away. Slice the stalk into pieces about the size of the florets, then put the stalk pieces and florets into the boiling water. Cook for about 4 minutes, until the broccoli turns bright green and is barely tender – you want it to still have some “bite”, but if you happen to overcook it, don’t worry, it will still be delicious. Drain the broccoli and plunge into the bowl of cold water. Swish it around a bit to diffuse the heat, then drain again, shaking off as much extra water as possible. Remove the broccoli from the colander and chop it into 1/2-inch pieces (approximately). 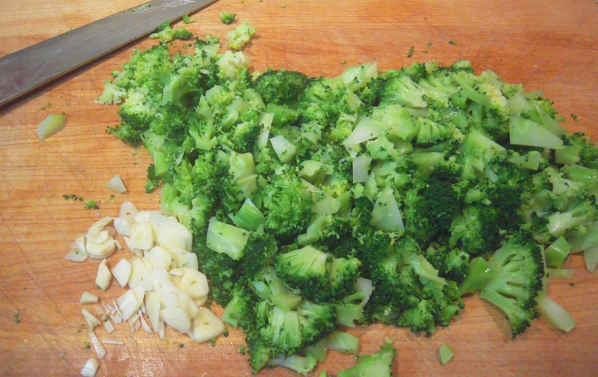 Garlic and chopped, blanched broccoli, ready for its flavour blitz.

Heat the 1/4 cup of olive oil in a skillet, and add the red pepper flakes. When the flakes start to sizzle, add the broccoli and season with salt and pepper. Let the broccoli enjoy the heat a bit, then stir occasionally. After a couple of minutes, stir in the garlic, then move the broccoli around every so often. When the garlic smells overwhelmingly delicious, turn off the heat. Taste and adjust the seasoning.

Oil an 11″x13″ baking tin (or something of similar size, or two smaller ones…). When the dough has doubled in size, turn it out onto a floured surface and give it a quick knead. Then using your hands, stretch the dough gently into the shape and size of the tin. It will resist slightly, but keep steadily working in all directions and eventually it will get there. Put it in the tin; if it shrinks back slightly, let it rest for a few minutes and then continue to stretch it to edges.

Spread the tinned tomatoes and their juices over the top of the dough, then drizzle a little bit of olive oil over and season with salt and pepper. Bake in a hot oven (190C/400F) for about 10 minutes, or until the bottom of the crust is fairly firm.

The tomatoes, before and after cooking. The juices sink down into the dough, giving it a nice depth of flavour which contrasts nicely with the brightness of the tomato pieces.

Take out of the oven and spread the broccoli mixture over the entire surface, then top with the mozzarella. Put back into the oven and bake until the cheese is how you like it. (The Author prefers browned, I like gooey, the kids vary depending on their moods.)

* You can use wholemeal flour if you prefer, but the dough will not get as much of a rise and will yield a heavier pizza base. I often put in about 1/4 wholemeal and 3/4 white, which gives me some satisfaction that I’m keeping my kids healthy, but also still interested in their dinner.

3 thoughts on “Broccoli Pizza (or, A Passport to Anywhere)”