A couple of weeks ago, the sun woke me up bright and early, and as it bathed the treetops in a golden glow, I breathed deeply and stretched my arms and announced to The Author (still half asleep), “I think the weather has turned now! No more hard frosts till the autumn!” And in his kind way, he said, “Hmmm.”

“I really think this is the turning point!” And I hopped out of bed, looked out the window and gazed upon . . . white. One of the hardest frosts of the year.

But, that was then and this is now, and Friday saw a triumvirate of auspicious events here in Devon: a solar eclipse, the vernal equinox, and the first day of spring.

Luckily for us, The Author’s parents had a stash of Solar Eclipse Viewing Glasses from 1999, when the last total eclipse happened in England. 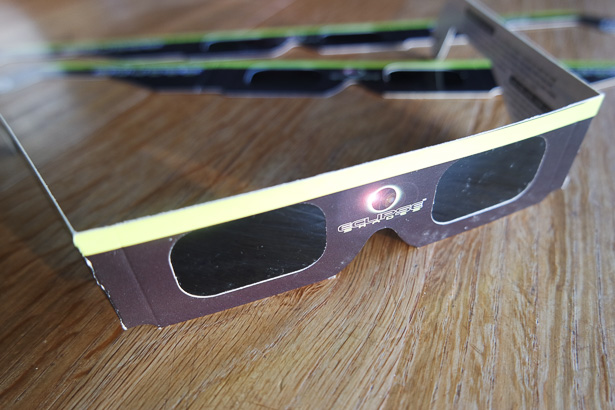 To be honest, for most of the eclipse we didn’t need the glasses – the sky was too overcast. But when the clouds occasionally parted, the sun was hot and very very bright. I expected much more dimness, but a surprisingly small sliver is enough to keep daylight going. So the glasses really came in handy, and we were able to look directly at the sun, a beautiful and eerie solar crescent.

The day of the eclipse also saw an assembly at the twin’s school. All the Year 5s wrote a play about the rain forest and then came up with some songs and dances for it as well. The son was a little nervous in the week leading up to the show, and he kept repeating his lines – and everyone else’s – whenever any conversation, about anything at all, came up. It transpired that he was worried about stage fright, and about his parents coming to see him in the show.

“But all parents look at their kids!” I argued.

“What if I wear these special glasses?” I dangled the solar eclipse specs. “Can I look straight at you then, since you’re my son?”

But still, the son was great (despite my looking at him, from the corner of my eye), and the sun is shining. The flowers have well and truly started, and the ground smells, well, spring-like. The only thing we’re waiting for is warmer weather. Until then, we will eat heartily.

Lamb Stew (Most definitely not a Shepherd’s Pie)

One thing (among the many others) that I didn’t quite expect when making this recipe was that my oven would so completely fail me.

I had planned a Shepherd’s Pie with beautiful piped topping of mashed potatoes which would be lightly browned by the blazing heat of the oven. What I got was a melt-down. I should’ve known. My oven has been temperamental since October; some days it ticks along quite merrily, producing BTU after BTU, and other days it tuckers out after a half hour of warming up. (Remind me to tell you the “hilarious” story of the Beef Wellington pastry fiasco on Christmas day…)

On this particular day, the mashed potatoes would have been better served on the side, which is what I now recommend. Or, what the heck, have boiled new potatoes instead.

One thing I would not recommend is putting the potatoes in to cook with the lamb. I find it makes the sauce a bit glue-y, and the potatoes lose their delicious earthy potato quality that is such a nice juxtaposition to the richness of the lamb.

Also, I heartily endorse frozen peas, because they were most likely picked at their best and processed immediately. If you have any in the freezer from the garden last summer, so much the better.

In an oven-proof skillet large enough to hold all the above ingredients, heat a little bit of oil and add the lamb shoulder. Cook well, stirring occasionally, until the lamb is browned on all sides. (Note: if the pan is too small to hold the lamb in one layer, without crowding, do this bit in batches, or you will just have braised, grey lamb rather than seared, beautifully browned lamb.) 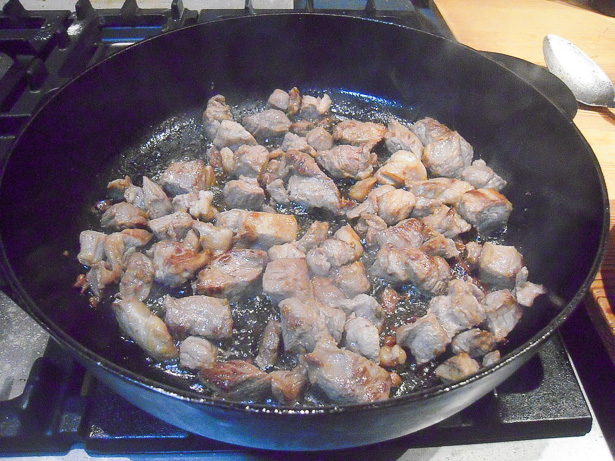 Just starting to take on a nice bit of colour.

Remove all the cooked lamb to a bowl, and add the onions, garlic, salt & pepper to the pan. You should be able to use the oil and juices left in the pan without adding any extra. Cook over medium heat, stirring occasionally, until the onions are translucent. 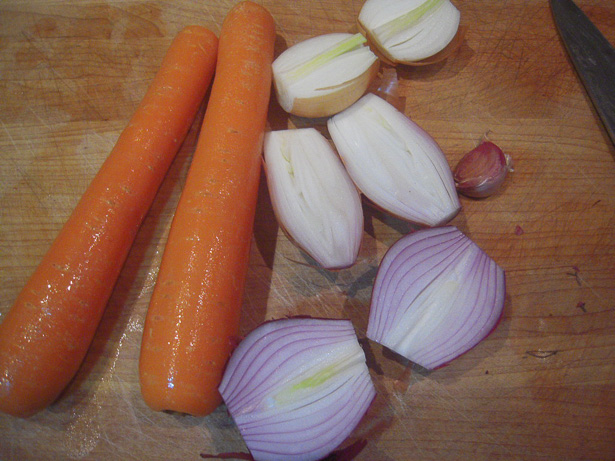 I didn’t have the right onions, so I used a shallot, a red onion, and a small white onion. It was great.

Add the red wine and scrape the pan to loosen any bits stuck on the bottom, then stir in the carrots, the cooked lamb, bay leaf, rosemary, and 1 cup of water. Bring to a boil, then reduce heat to a simmer and cook, covered, for about an hour, checking occasionally to make sure the water has not evaporated too much. 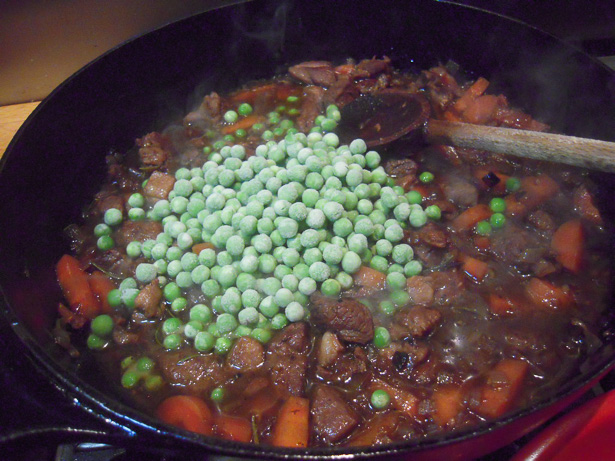 After the meat has been cooking for about an hour, test it to see if it is tender – it should be at this point, but if not, you can simmer a little more. When it is ready, add the frozen peas and a dash of worcestershire sauce if you fancy it, and bring the entire thing back to a boil, then reduce to a simmer and cook for a further 3-4 minutes.

Serve with mashed potatoes, or boiled new potatoes, or rice, or just on its own if you want. A piece of oiled and grilled homemade bread would also be nice (but don’t talk to me about the grill). I expect you’ll figure something out.