Sometimes I feel that cooking is an act of faith.

In life, there is no guarantee that what you’re doing will end up the way you want it to. Even if you do the same thing, day after day, you might not get the result you are looking for. There are so many changing factors. It’s a total crapshoot.

With cooking, following a recipe will give you some assurance, but still, the variables that get thrown at you can change the outcome. I was thinking about this because I have just gone through a few weeks of intense cooking for various events, and each time, various obstacles were thrown in my path over the course of creating the meal. It was a little worrying. When you are catering for 120, you can’t afford to start over (time-wise, money-wise, sanity-wise) if something goes wrong.

Take ricotta, for instance, which I have made four times in the past 2 weeks. Ricotta is a very simple cheese to make. You bring milk (cow, sheep or goat, or all three if you want) to 190F – or just before it starts to boil – and then you add the vinegar. Stir it a bit, let it sit, then strain it, and voila! You have just made a lovely, fresh ricotta cheese. Or maybe not.

I made some ricotta with a group of students a few weeks ago, and we all watched the pot, waiting for the tell-tale tiny bubbles around the edges. Watching for something that you don’t want to happen – in other words, waiting for the milk to NOT boil – is a bit odd. It feels slightly like when I am in an unfamiliar place and ask for directions from locals. (“Go down this road about three miles, till you get to where the old oak tree used to be….”)

We could have used a thermometer, but not everyone has a thermometer in their kitchen, and in this instance it is very useful to know the signs of an almost-boiling pot of milk. So in the interest of heuristic learning, we all watched.

And we watched, and watched, and stirred so it wouldn’t catch on the bottom, and watched some more. We looked for the amount of steam rising from the pot, and the amount of bubbles that formed when we stirred. We tried not to confuse those with the bubbles that might be forming because the milk was coming to a simmer and gearing up to a boil. We noted that the milk got thicker-looking as it got hotter, and that as the steam became more intense, the froth at the top of the pot looked creamier and more enticing. And then we saw the faintest agitation in the centre of the milk. We stirred some more to make sure the milk was an even temperature throughout. And then, we called it. We felt we had reached peak simmer, and we poured in the vinegar.

The milk immediately separated into two substances, one clear and one cloudy, and the cloudy bits started looking quite like curds. We left it alone for an hour, and when we came back to strain it, we had lovely ricotta to add to our ravioli filling.

A week later, I was making goat’s milk ricotta for another event. I had to make a much smaller amount, but I also had a few other things going on at the time. Still, I did the same things: I stirred, I watched, I waited, I stirred. I have a thermometer, but I didn’t get it out. I helped my children with their homework, and I salted aubergine, and I chopped onions. And I stirred, and watched. I sorted out an argument (I can’t even remember what it was, nor can they, probably), and I put on the kettle for tea, and I stirred the milk and I thought, “It must be ready.” I poured in the vinegar and …. nothing.

Let me tell you, if you have added the acid to the milk before it is ready, you will never get ricotta later, no matter what you do. (But the acidic milk is lovely in cake batter.)

The next day, I tried again. This time, I watched with no interruptions, and when I added the vinegar, the milk separated.

A few days later, we had 24 litres of milk, in two separate pans, on the hob and heading towards a simmer. The dinner – for 100 people – was that evening. If this didn’t work, we could do it over. But we would have wasted 2 or more hours and at least 24 litres of milk. Long story short, it worked. Big sigh of relief.

But here’s the thing. I know why the goat’s milk ricotta didn’t work that day: I was not paying enough attention to it, and I was trying to hurry it along. I also know, from experience, that each dish needs its own time. You can turn the heat up to cook something faster, but you may lose a delicate flavour in the meantime. You also might burn it. You can say that something is done when it patently isn’t, and what you will lose (as was the case with my ricotta) is the essence of the dish. Milk and vinegar is not as good as cheese, and certainly not as solid.

So it all boils down to faith: faith in the recipe, faith in your judgement. And bizarrely, faith that if you do something the same way every single time, you will get the same outcome, every single time. I don’t know why I find that miraculous, but I do. 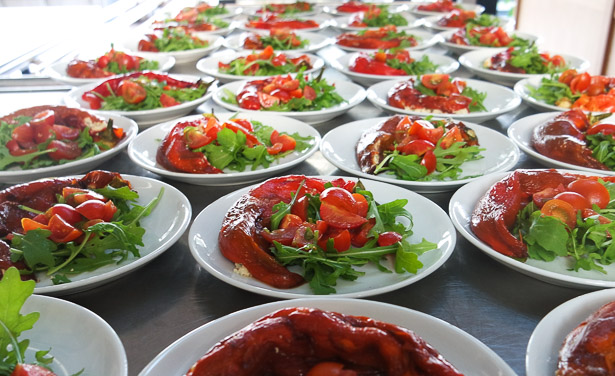 Charred Peppers stuffed with Ricotta Cheese, served with Tomato & Chili Salad. We made enough for 100 people, but 130 people showed up… How we served everyone is a miracle in itself.

If you decide to make this, be patient and watchful, or just use a kitchen thermometer.

There are all sorts of things to do with ricotta. You could eat it for breakfast or a snack with honey and nuts, or you could stuff it into some charred and peeled peppers for a light lunch or side dish, or you could use it in cheesecake, or in lasagne, or as a ravioli filling.

The great thing about making your own ricotta is that you can control the quality, the fat content (more is better, if you ask me!), and the type of milk. It may also work out to be cheaper, depending on your milk source. The milk-to-cheese ratio in this is about 100:16; that means that it takes 1 litre of milk to get 160g of cheese, or for you old-skool folk, 1 gallon of milk will yield about 20 ounces of cheese (just over 2 cups).

Put the milk and the salt into a large pot over medium heat. Stir often to keep the heat distributed and to keep the milk from scorching on the bottom.

When you see the steam start to rise, pay attention. Keep stirring, and watch for the milk to get quite frothy on the top. As you stir, bubbles will form, but that is because of the agitation. Keep stirring, but stop occasionally to let the milk settle and to see if there are any heat bubbles forming around the edges of the pot. Eventually, the steam will be much more prominent, and the milk will look very creamy, and at some point shortly after that, when you are not stirring the milk, you will see it start to move on its own. (If you have a thermometer, now is the time to use it – you are aiming for 190F or 88C.) When that happens, turn off the heat, and quickly but gently stir in the vinegar; you should see the milk starting to separate. Don’t worry if this doesn’t seem very dramatic. If the temperature was right, and the vinegar was acidic, time will work its magic.

Leave the whole thing alone for about an hour, then strain it through a sieve lined with a dampened cheesecloth. (You can save the liquid, or whey, to use in bread or cake. I know someone who even made a whey-lemonade out of it; surprisingly, that was not disgusting – but it was not actually more-ish either…)

You can use the ricotta straightaway, or you can keep it, tightly sealed, for up to a week in the fridge. You could also freeze it, should you be so inclined.