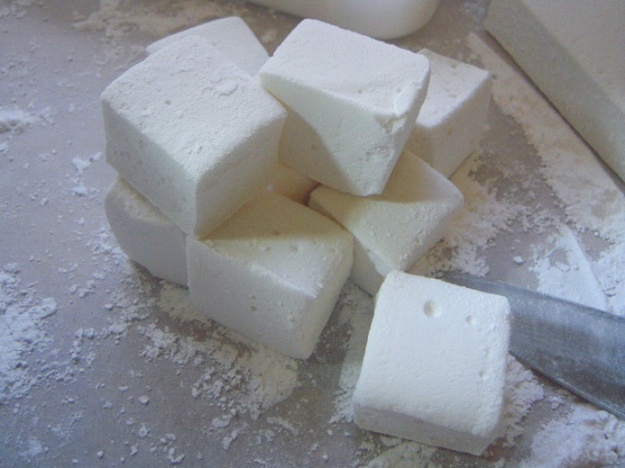 “If we each of us knew just eight proper, wholesome recipes by heart, the world be a better, happier place.”

I came upon the above quote in an article in The Guardian. The author didn’t specify which eight recipes, or even why eight, but even with these omissions, I have to agree with the idea behind the sentiment. If you know how to cook, you will have better things to eat, and that makes your world – and your experience of it – instantly better.

For the past few months, I’ve been teaching cooking skills to a couple of secondary school girls, as part of their Duke of Edinburgh awards. It is no exaggeration to say that, in the first lesson, I had to show them how to turn on the stove. Since then, they have made (from scratch) roulades, sausages, ravioli, cupcakes, bread, pizza, soups, cookies, citrus curd, muffins, crepes, four basic pasta sauces for when they need a quick meal … you get the picture. 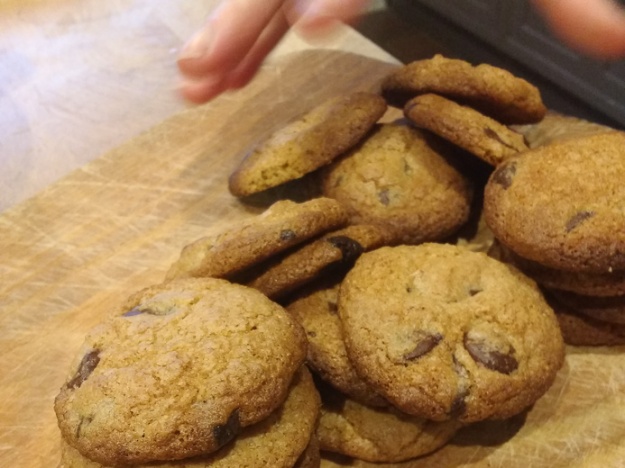 The girls’ tastes dictated the direction most of the lessons, but I did try to steer them away from doing a similar thing every week; despite the fact that cooking is learned by repetition, endless variations of cookies didn’t seem the best way to hone their budding skills.  So we settled on alternating “savoury weeks” with “sweet weeks.” Despite this, they were resistant to my suggestion of marshmallow – “too sweet”, they said when I suggested it – but I persevered because I wanted them to see the alchemy and possibilities of simple ingredients. I wanted to demystify cooking, and to show them that there are no limits if they start with a good recipe and follow it to the letter and then, once they are confident, they can add their own twists.

In the past 12 weeks, the girls have chopped onions (which they still dread), separated eggs (which they still squirm at), and swirled crepes in a pan (which caused a little frustration but the crepes came out beautifully). I don’t know if they feel that they are happier or better off for having done these things, or for knowing how to make a mirepoix for the base of a soup, or how to whip egg whites till they are stiff so that the roulade is springy, or how to knead bread dough so that the gluten forms. Being teenagers, they are difficult to parse. 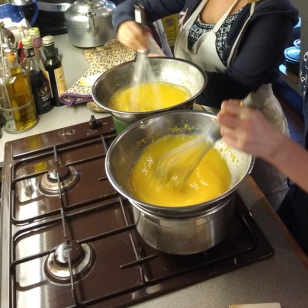 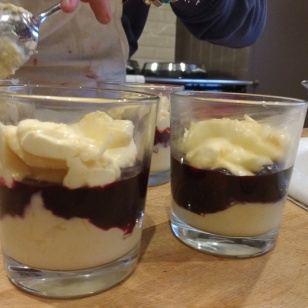 Making a citrus and berry fool 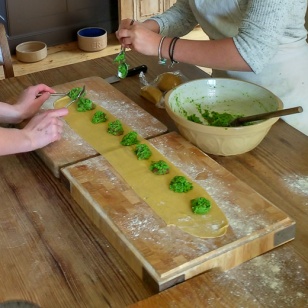 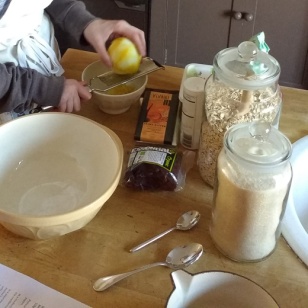 To gain their Duke of Edinburgh award, they will need to design and prepare a meal for their teachers, and I was told I will also be invited to judge it. With this test meal, we will be able to rate their knowledge (and to some extent, my teaching), and I hope they do well. But my true wish is that at some point, the skills they have learned will translate to a meal they are proud to make and to joyfully serve to their friends and family. To me, that’s one of the best parts of civilisation and what makes life worth living.

It’s what makes my world a better and happier place.

I really enjoy seeing the transformation of sugar and water into the fluffy, springy, snowy marshmallows, but as I was writing this, I thought perhaps it was not a good idea to post a recipe which is, at its heart, mostly sugar, since sugar is going way down on the popularity scales right now. But then I figured that we all want something sweet every now and then. Plus, the summer is coming up, and toasted marshmallows are pretty de rigueur for barbecues. And anyway, as I always say, enjoy everything, just don’t enjoy too much of everything.

Speaking of sugar, most recipes for homemade marshmallows call for corn syrup because it helps to keep the sugar from crystallising, but if you are opposed to corn syrup, or if you can’t find it where you live (and I can’t), careful cooking can help keep your sugar clear. The thing to remember about sugar is that it only needs one rogue crystal to make all the melted sugar backslide into crystals. That means that if you stir the sugar while it is melting, and some of the sugar gets above the water line and stays there, later – when the whole lot is boiling – the sugar that is melting in the water will reach the crystal on the side of the pan and start to re-crystallise. This is frustrating to say the least.

So although these marshmallows are fairly simple and straightforward to make, you need to remember not to stir the sugar!

You will also need a candy thermometer (one that clips onto the side of your pan), and a stand mixer.

The first thing you need to do is grease an 8″ x 11″ pan (or a pan that is an equivalent size) and line the inside with parchment paper. Now grease the parchment paper. You can use butter or Trex or a spray; it doesn’t really matter which.

The second thing you need to do is get the gelatin to bloom; this will take about 10 minutes, and you will know it is ready when the gelatin looks like a shar pei’s skin.  Here’s what to do: put 120ml (1/2 cup) of water in the bowl of the stand mixer, and sprinkle the gelatin over it. You can put the bowl on the mixer but, otherwise, leave it alone for now and get on with the next step.

Put the remaining 180ml (3/4 cup) water, sugar and cream of tartar in a medium-sized, heavy-bottomed saucepan over medium low heat. Cook gently, without stirring, until all the sugar has melted, then turn the heat up and let the mixture boil until it reaches 115C (240F). (I usually take it up a degree or two, to account for variations on my candy thermometer.) 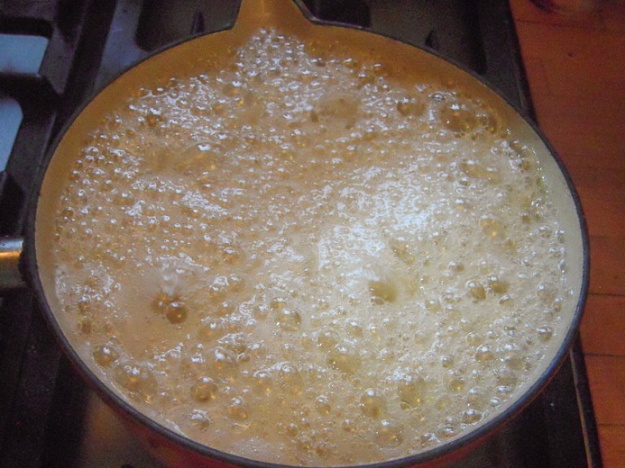 When the sugar is boiling vigorously, it’s time to clip the thermometer on!

Remove syrup from the heat. Attach the whisk to the mixer and, with the motor running on low, drizzle the hot sugar syrup into softened gelatin. (It probably goes without saying, but this syrup can burn you, so be careful!) When it has all been added, add the salt, then turn the mixer on high and let it whip for about 8 minutes or so. It will become white and thick and should have doubled in volume.

Add the vanilla (or other flavouring) and food colour if you are using it. Whip thoroughly for another minute to ensure that the additions are well-mixed in.

Pour the marshmallow mixture into your prepared pan and smooth it out as best you can with a spatula. Tap the pan lightly on the counter to help the marshmallow settle. Let it set in a cool place for about 3 hours. Do not cover it and do not refrigerate it. 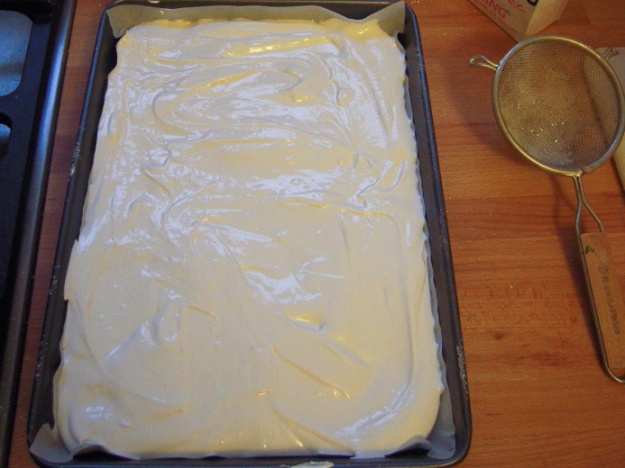 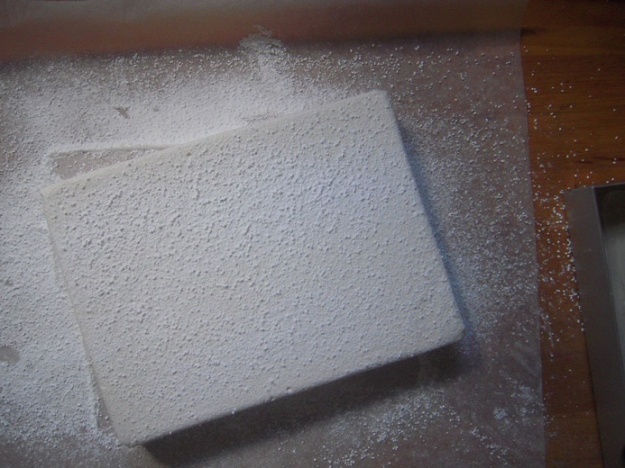 You can cut the marshmallows into any shape you want. The only thing you need to remember is to immediately dust every cut surface with icing sugar, or they will all stick together in one big mass.

The marshmallows will keep very well in an airtight container for several weeks. If you live in a humid climate – say, the rainforest, or Devon – it is advisable to have several airtight containers, so that your entire stash of mallows isn’t exposed to damp when you dip in for just one or two. On the other hand, if you have kids, you won’t need to worry about these hanging around for long.

*Gelatin is not vegetarian, but you could use agar agar or Vegeset instead. Although I have used both of those before, I haven’t tried either of them with this recipe, so if you do, please let me know how your marshmallows turned out!

2 thoughts on “Homemade Marshmallows (and cooking for happiness)”